Background
Ethanol is an evolutionary conserved neuromodulating agent, effective in mammals as it is in invertebrates. The fruitfly Drosophila melanogaster responds to ethanol with all the stereotypical signs that are also observed in humans: including euphoria, sedation, habituation and addiction (for a review see 1). Genetic predisposition in humans is accounted to be responsible for about 50% of the risk of developing addiction to ethanol, a major medical and social problem in modern society. For all these reasons, Drosophila has successfully been used in the past decades to investigate the genetic and molecular components of ethanol effects in the brain.

Hypothesis Student will Investigate
The student will investigate how ethanol affects the sleep / wake cycle of Drosophila and, conversely, how the sleep / wake cycle affects the behavioural and molecular responses to ethanol. Some questions that the student will address are: is the sedation induced by high concentrations of ethanol similar to sleep, with all the restorative effects associated to it? What are the effects on the sleep / wake cycle of chronic consumption of ethanol? In flies, Response to ethanol has been shown to be under partial control of the genes regulating the circadian clock and regulating synaptic output in the brain[2], and the same is true for sleep[3]: what is the biological relevance of this observation. 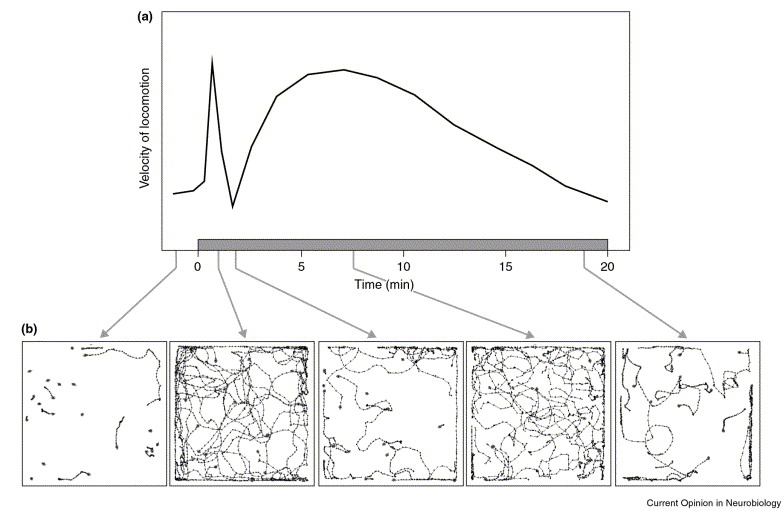 Effects of ethanol on Drosophila locomotion (a) Representation of the locomotor velocity of wild-type flies during an exposure to a moderate dose of ethanol (ethanol exposure period is shown by the grey horizontal bar). (b) Computer-generated traces of the locomotor behavior of a group of 20 flies before and during exposure to ethanol vapor. Each panel corresponds to a 10-s time period recorded at the times indicated in (a). Reproduced from (1)

Techniques Student will Use
The student will perform behavioural experiments to investigate the physiological responses to ethanol sub ministration: this will include assaying sleep, anesthesia, sedation, motility as well as learning and memory by mean of Drosophila learning paradigms. The student will also perform anatomical dissections and molecular analysis exploring how gene expression changes in the brain upon ethanol administration.